You are here: Home / News / Upmeyer stepping down as speaker of Iowa House 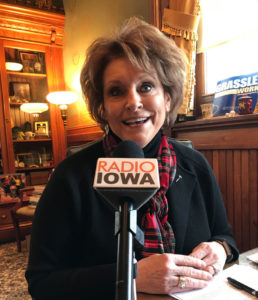 The first female speaker of the Iowa House is stepping down.

“It’s been a huge privilege and honor to do the job, whether you’re male or female, but I’m particularly I guess touched and privileged that I got to be the first woman to do it,” House Speaker Linda Upmeyer of Clear Lake told reporters this afternoon during a news conference on the House floor.

Upmeyer will serve out the last 14 months of her current term in the Iowa House, but she told her Republican colleagues earlier today that they should choose a new speaker to take over in January when the 2020 legislature convenes.

“The last few years I’ve known the end was in sight. You know, I wasn’t sure exactly when, but I knew I was getting ready to spend more time with family, do other things,” Upmeyer said. “and it just became a really sharp contrast this spring and summer when the family was here that that’s what I needed to do.”

Upmeyer, who is 67 years old, told reporters she wants to spend more time with her grandchildren who live in the Des Moines area and Washington state.

“And my husband will appreciate having me around a little more, I think. We’ll find out, I guess,” Upmeyer said, laughing.

Upmeyer, though, indicated she’ll help other GOP candidates run for office and might take another job in politics, if one materializes.

“You never when an amazing opportunity and something you’re really interested in doing comes up and I would never rule that out,” Upmeyer said, “but for right now, I’m going to take an opportunity to go visit some family and go do some things.”

Upmeyer, who lives in Iowa’s fourth congressional district, did say she will not run in the GOP primary against Congressman Steve King.

Upmeyer told reporters she has no regrets about her tenure in the legislature.

“You know people ask you when you start in the legislature and after you’ve served a few years: ‘How long are you going to stay? How long do you think you’ll be around?’ And I can remember when I was elected and I saw people that were here like 10 years and I thought: ‘Wow, 10 years here. Are you kidding me?’ Well, here I am,” Upmeyer said. “I’m at 17 and it will be 18 (years).”

Upmeyer will turn over responsibility for the House elections in 2020 to her successor. It’s what happened to Upmeyer in November of 2015 when House Speaker Kraig Paulsen stepped down mid-term and Upmeyer became speaker-elect. Upmeyer said it let her guide the legislative record the House GOP would run on and, as speaker, she was better able to raise money for the campaign.

“All of those things I found helpful, so I think that was a good thing to do for my successor,” Upmeyer said, “and I can still help in the background, in the wings and maybe kind of double-down on the opportunity.”

House Republicans will meet in the next seven to 10 days to choose Upmeyer’s successor and that person will have the title of Speaker-elect until January when the full House elects its speaker.

Upmeyer’s father, Del Stromer, was a long-time lawmaker who served as speaker of the House for two years, in 1981 and 1982.