You are here: Home / Human Interest / Dubuque Library giving away thousands of books in reading program 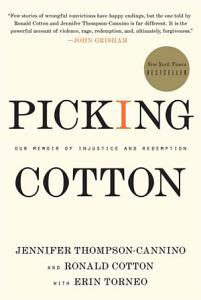 The public library in Dubuque is giving away 4,000 copies of a book as part of a community-wide reading program.

Library director Susan Henricks says the book is “Picking Cotton: Our Memoir of Injustice and Redemption.” It’s the story of a woman who was raped, the man who was convicted and sent to prison, and his release more than 10 years later when DNA evidence exonerated him.

“How to come to terms with this is just overwhelming,” Henricks says. “She really struggled for a couple of years. It was eating her up. She just couldn’t live with herself, knowing she was responsible for putting this man in prison for so many years. She reached out to him and this is their story. They wrote the book together. It’s about their process of forgiveness and healing.”

As part of the All Community Reads program, the authors — Jennifer Thompson-Cannino and Ronald Cotton — will come to Dubuque for a joint appearance on November 5th. Henricks calls it the perfect book to illustrate restorative justice, one of the themes for the reading program.

“Restorative justice is about repairing the harm that’s been done and ultimately, leading to forgiveness and healing,” she says. Henricks spent the last year asking for donations and convincing the publisher to offer a substantial discount so as many people as possible could participate in the community reading program.

“I believe that if you want people to read the book, you’ve got to give them the book,” she says. “Instead of having the library buy 20 copies and then you’re on a waiting list, just give the books to people and then they’ll have an extra book for their own personal collection but it will encourage them to read it.”

The books will be available while the supply lasts, at various library branches, several Hy-Vee stores, and a few other locations in Dubuque.