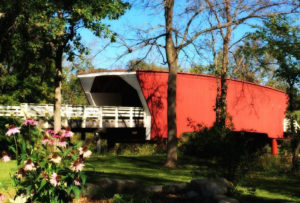 Visitors from as far away as Australia are expected to head for southwest Iowa’s Madison County this coming weekend during the 50th annual Covered Bridge Festival.

Heather Riley, executive director of the Madison County Chamber of Commerce, says there will be guided tours of the historic wooden bridges, arts and crafts, a photo contest, live music, festival food and more. “Typically, we look for about 20,000 people over the weekend,” Riley says. “We have a 5K, there’s a quilt show, the car show is on Sunday as well as our parade. We have two stages of entertainment.”

While there were once a few dozen covered bridges in Madison County, there are now just six, which includes one bridge that fell victim to an arson fire in 2017. “We’re going to do a ribbon-cutting and a rededication of Cedar Bridge which is now fully rebuilt and back,” Riley says. “That’s a $720,000 project and lots of donations by Iowans and from people across the country who enjoy our covered bridges, too.”

Originally built in the 1883, the Cedar Bridge rose to fame in the early 1990s after James Waller’s novel, “The Bridges of Madison County,” was published and then adapted for film. Cedar Bridge is on the cover of the book. Madison County is considered the Covered Bridge Capital of Iowa, with the largest collection of covered bridges in one area in the western half of the Mississippi Valley.

“I think at one time there was some discussion about maybe tearing down these covered bridges and thankfully, some enlightened soul decided, ‘No, these are actually pretty special,’ so the Covered Bridge Festival began in 1970 as a way to preserve them,” Riley says. “The book was written 20 years after that which drew even more attention to our community.”

The county seat, Winterset, is also home to the John Wayne Birthplace Museum and the Iowa Quilt Museum. The festival runs Friday and Saturday (October 12-13).