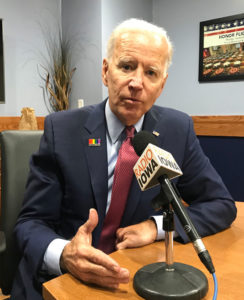 Former Vice President Joe Biden today said if he’s elected president, he will build on what he called “the squeaky clean…environment” of the Obama White House and have a policy for his family’s work that’s different than President Trump’s.

“No one in my family will have an office in the White House, will sit in on meetings as if they’re a cabinet, will in fact have any a business relationship with anyone that relates to a foreign corporation or to a foreign country,” Biden said.

Biden’s comments came during a Sunday afternoon news conference in Iowa. His son’s attorney issued a public statement early Sunday morning saying Hunter Biden will resign from a Chinese company and will not take any foreign work if his father is elected president.

President Trump’s request that Ukraine’s president initiate an investigation of Joe and Hunter Biden’s activities in Ukraine is at the center of an impeachment inquiry. The former vice president, in speaking with reporters, said no news operation “of any consequence” that has examined the record has found he or his son did anything illegal.

“What I’m not going to let you all do is take the focus off the problem,” Biden said as he started to rap the lectern with his knuckles to emphasize his points. “No one, no one has asserted my son did anything done. No one has asserted that I have done anything wrong except a lying president.”

Five days ago, Biden for the first time called for Trump’s impeachment. Biden appeared Sunday afternoon at a forum sponsored by the United Food and Commercial Workers Union and Biden told the crowd of about 350 that it is a crime to ask a foreign power to interfere in a U.S. election.

During an interview with Radio Iowa later Sunday afternoon, Biden said if he is elected, he will not follow President Ford’s example in pardoning Nixon so Nixon was not prosecuted for his role in Watergate.

“It wouldn’t unite the country,” Biden said. “You’d say: ‘Wait a minute. I get a parking ticket and I’ve got to pay it. This happens to me and I’ve got to go to jail. This guy does all these things that put us jeopardy and he gets off? I think this is of a different nature. And I think President Ford, God love him he’s a good guy, I knew him pretty well, I think if he had to do it over again he wouldn’t have done it…because he didn’t get re-elected.”

According to Biden, Trump’s assertions about him and his son have had “no negative impact at all” on the Democratic presidential race.

“Everybody knows he’s a liar — the president — I mean, for real,” Biden told Radio Iowa. “…I’m the reason he’s being impeached. He’s indicted himself by calling in foreign powers to try to impact the election.”

A CBS News poll released Sunday found Biden and Elizabeth Warren were each the top choice of 22 percent of Iowa Democrats and Bernie Sanders was the top choice of 21 percent. Biden describes that as a “tie” among the three. The past four Democratic nominee for president all won the Iowa Caucuses, but Biden said he could win the party’s 2020 nomination without winning Iowa.

“I’m going to win the Iowa Caucuses, but the answer is I could because this is a totally different circumstance now,” Biden told Radio Iowa. “You have, I don’t know how many candidates are going to be left, but you have somewhere between 10 and 20 and, you know, you’ve got to get a percentage of the vote in each caucus to count anything and I think we’ll do just fine and I think we’ll do extremely well in the following states as well.”

Biden credited his lead among voters over the age of 50 to his history of campaigning in Iowa over the past three decades. Biden is expanding his Iowa campaign and now has about 100 paid staff in the state, working out of 22 offices around the state with plans to open three additional offices before the February 3, 2020 Caucuses. Biden suggests there’s plenty of time to lay the groundwork for a Caucus Night victory.

“You know, in Iowa it’s not over until the last person shows up,” Biden told Radio Iowa.

(This post was updated at 11:10 a.m. with additional information from the Biden campaign about staffing.)