The U.S. Marine Corps has confirmed that an Iowa man was one of the marines in one of the most famous photos ever taken.

The Marine Corps says one of the six men in the picture raising the American flag on Mount Suribachi at Iwo Jima during World War Two is Corporal Harold P. Keller, from Brooklyn, Iowa

Keller’s daughter, Kay Maurer of Clarence, told KCRG TV9 she recently got a letter with that confirmation. “To have the Marine Corps send this official letter — they had talked to me on the phone a few times and said yes we agree — I am going to frame it,” she said. Maurer says she first learned her dad might be in the photo when she received a call two years ago from private historian Brent Westemeyer from Johnston. “He was the one who first figured it out,” Maurer said.

The findings by Westemeyer and several other historians confirmed by the Marine Corps and FBI investigators were key to identifying Keller. She says the researcher found two pictures, and that gave them all the identifying things about how the soldiers in the picture were dressed .Through extensive research, including facial recognition, they determined Keller had been mistaken as Private First Class Rene Gagnon for more than 70 years.

“Now, I look at the picture and go, ‘whoa, that’s my dad’. How amazing is that?” Keller said. Kay, and her husband, Steve, said it’s surreal but not totally surprising. They says he never ever told them anything that had to do with the war. However, Kay thinks he did tell one member of the family.  “When dad got home from the war. I’m sure he told my mom,” she said. 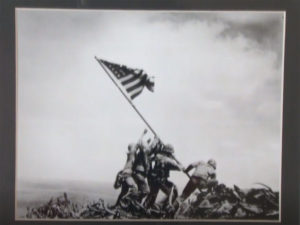 Keller died from a heart attack in 1979, he was 57. Steve told KCRG TV his getting the recognition is an honor. “The odds of him making it through this whole campaign and making it home, and being a normal person and living a normal life are infinitesimal,” Steve said.

Kay says the photo is just one event in what was a heroic time for a lot of people. “Those flag raisers, in the context of being a flag raiser, those aren’t the heroes. The heroes are every single person that put on a military uniform and puts their life on hold for our country,” Kay said Maurer says with or without the recognition, the fond memories of her dad always there, as she says he was
the best father ever.