You are here: Home / Outdoors / Coyotes remain a popular draw for Iowa hunters and trappers 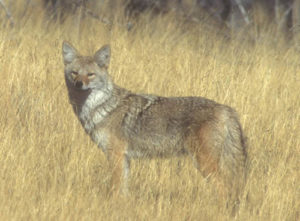 Iowa saw a record number of coyotes taken last year and a DNR furbearer biologist says they remain the hot animal to hunt and trap.

Evelsizer says several things have put the coyote in the spotlight. “In the last few years the fur market for coyotes has remained good — and then at the same time there’s more TV shows, videos — and the hunting industry has developed gear a little more specifically predator hunting,” Evelsizer says. “And so it’s just kind of caught on. It’s become more popular, all those things have just kind of come together and it’s made coyote hunting and coyote trapping more popular than ever.”

He says coyotes have a key place in the food chain here. “As a whole, coyotes are the largest carnivore and canine that we have in Iowa. Typically an adult will weigh up to 35 pounds or so. A few can get bigger than that — but on average — an adult male coyote is round 30 to 35 pounds,” according to Everlsizer. “So, they are like a medium-sized dog if you are trying to picture what they look like.”

He says they start adding some weight in the fall and their fur becomes “prime” or very thick so the animals can make it through winter. There are a variety of other furbearing animals hunted in Iowa. “Raccoons are still up there as probably the number two species most targeted. And after that it is probably a mix of mink and muskrat, and red fox, things like that,” Evelsizer says.

He says the majority of the furbearers in Iowa are doing very well. “Either their population is currently stable or trending up slightly — it depends on which species. There’s only two species that are a concern, gray fox or muskrat,” Evelsizer says. “Gray fox, the population has declined fairly drastically.” He says they want to do a study to try and determine why the gray fox population is dropping. Evelsizer says the muskrat population has been declining across the Midwest — but has seen an uptick in some states — and is not as big a concern.

The furbearer season for most species opens November 2nd. The coyote season is continuous. The DNR reports Iowa ranks in the top five states for the number of licensed furharvesters per capita, averaging around 14,500 each year for the last three years.