You are here: Home / Fires/Accidents/Disasters / Clean-up underway after 20-30 cars of coal train derail near Red Oak 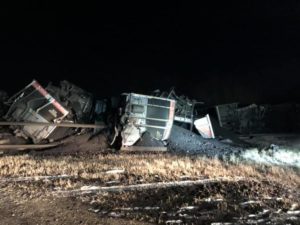 An investigation is underway into the cause of an early-morning train derailment in southwest Iowa.

Montgomery County Emergency Management says the county’s communications center was notified by Burlington Northern Santa Fe Railroad at around 4 a.m. regarding a coal train derailment in the area of D Avenue, west of Red Oak.

Deputies of the Montgomery County and Mills County Sheriff’s Office responded and located the derailment under the Boxelder Avenue bridge. Approximately 20-to-30 coal cars were involved.

There were no injuries and no hazards to the public. BNSF crews are on scene and more heavy equipment is expected later this morning.

Motorists are asked to avoid the area and allow crews to work. At this point, Boxelder Avenue will remain open. However, Burr Oak Avenue is closed for local traffic and BNSF crews only.