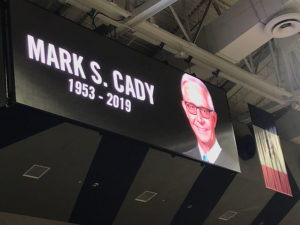 Family, friends and much of the state’s legal community gathered this morning to pay tribute to Iowa Supreme Court Chief Justice Mark Cady, who died on Friday at the age of 66.

Texas Supreme Court Chief Justice Nathan Hecht was the first of four to deliver a eulogy.

“Iowa has lost an extraordinary judge and statesman. You know that well,” Hecht said. “I can tell you this: so has the country.”

Cady became president of the National Conference of Chief Justices this last July and Hecht noted one of their peers recently had described Cady as a “courageous judge.” Cady authored the 2009 decision which legalized same-sex marriage in Iowa. Marsha Ternus, who was the court’s chief justice at the time, said Cady got the assignment by drawing a slip of paper from a bag.

“Iowa was fortunate when he drew that case,” Ternus said. “Mark drafted a prinicpled decision, based on legal concepts long applied by Iowa courts. He wrote eloquently, putting our decision in the context of Iowa’s rich history of upholding Iowans’ civil rights.”

The court’s decision was unanimous.

“This decision stands as one of Mark’s finest,” Ternus said, “but I want you to know that Mark cared about every decision he made, every opinion he wrote and every party who brought their dispute to the court for resolution.”

Cady’s family asked the Des Moines Gay Men’s Chorus to lead the gathering in singing “Let There Be Peace on Earth” to conclude the service. Attorney Mark Brownlee, one of Cady’s friends since their childhood in Fort Dodge, said Cady lived a life of purpose and meaning.

“Mark leaves a footprint on his family, friends and justice in the state of Iowa,” Brownlee said. “…His remarkable legacy and impact will outlive all of us.”

“In public presentations, he could be as sober as a judge. In private, I can’t imagine anyone who laughed more,” Kenyon said. “I’m biased, but he was probably the best wing man a guy could have.”

Today’s Celebration of Life Service was held at Drake University, where Cady earned his undergraduate and law degrees. The trophy for an annual golf tournament pitting University of Iowa law school grads against Drake Law grads has been renamed the Cady Cup.