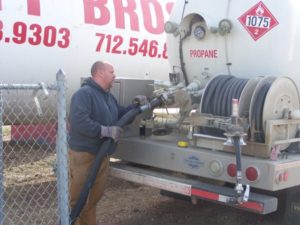 Naig says that could help ease the shipping issues created by the late harvest and cold weather. “They will start dispute resolution next week — which gets the shippers and the pipelines together. And we hope that will yield some increased supply as we head into the next week and into the following week,” according to Naig.

He says the late October the demand for propane in Iowa was three times higher than it normally is, and the demand hasn’t eased a lot. “Anything that we can do to put more propane in these pipelines will absolutely help resolve that,” Naig says. “We are very hopeful. It won’t be an immediate solution — but we are heading in the right direction and we appreciate the work that our governor and our senators and FERC to bring some resolution to this.”

The nationwide supply of propane has been good — but Naig and others say the issue has been getting enough shipped to Iowa as the demand dramatically increased.