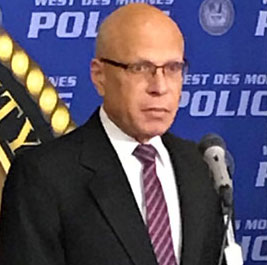 As South Dakota officials attract national attention for their anti-meth campaign, the drug is a growing problem in Iowa as well.

More than 90 people died of a meth overdose last year in Iowa — tying a previous record — and Woolery says there’s been a “surge” in the number of Iowa adults who are using meth.

“It’s so addictive that it’s going to take professional help, in most cases, to stop that use,” Woolery says.

More than 10,000 Iowans were in a substance abuse treatment program, trying to kick an addiction to meth, in the last state fiscal year. That’s an all-time high. One meth-related trend has subsided, however, as there are few “meth lab” busts in Iowa these days, but Woolery says larger quantities of more potent meth are being smuggled into Iowa.

“I think you could argue that we are being flooded by methamphetamine in some areas,” Woolery says. “We have reports from law enforcement where it used to be ounces of methamphetamine they would seize or deal with. Now it’s in the pounds and that’s pretty common these days.”

Mexico is the number one point of origin for the meth that’s being sold illegally in Iowa today, according to Woolery.

“Frankly, we need some assistance on the international front to try and reduce the supply from the point of origin,” Woolery says.

The number of meth-related convictions in Iowa courts is growing as well. More than 18 percent of the inmates sent to an Iowa prison in 2017 committed some sort of meth-related offense.

Woolery says it’s not for him to judge whether the controversial “Meth, we’re on it,” slogan South Dakotans adopted for their anti-meth campaign is appropriate, but Woolery says there should be a sense of urgency in Iowa and elsewhere to prevent meth use and deal with those who’ve become addicted.