You are here: Home / News / ‘Dry slot’ pushes heavier snowfall out of Iowa, into Minnesota 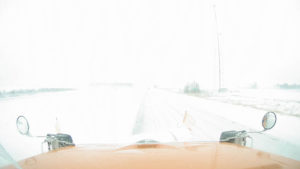 DOT snowplow camera on I-35 near Northwood area.

Deep snow did not materialize in northwest Iowa, but the wind is whipping up the snow that did fall. National Weather Service meteorologist Brad Small says between two and five inches of snow fell north of a Storm Lake to Mason City line.

“With these strong winds this morning, it’s produced areas of blowing snow. We have visibilities down to a mile or less across much of these same areas and that’ll continue through the morning hours as these winds don’t die down too much,” Small says. “We’re still looking at gusts of 40-50 miles per hour.”

The storm system that dumped a foot of snow in western Nebraska hit a wall of dry air when it reached Iowa according to Small.

“That was some of the impact, what we call a dry slot in meteorology, where some dry area worked in,” Small says, “and that pushed probably the more significant snowfall totals to the north of us, into Minnesota.”

Rain fell in other parts of the state.

“There was indeed some thunder,” Small says. “We had some thunder snow in the north and some thunder storms farther south and east, even some severe weather warnings were issued by the Quad Cities office along the Mississippi River, so we had all sorts of weather Tuesday night into Wednesday morning.”

Small is based in the National Weather Service office in Johnston and worked the overnight shift, tracking the storms.