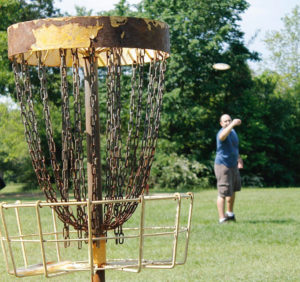 The ‘hole’ on a disc golf course.

The Quad Cities will host hundreds of competitors from one of the fastest growing sports in the country.

The metro area will be home to the 2021 U.S. Masters Championships for the Professional Disc Golf Association. Chase Roberts, who owns a disc golf supply store in Moline, Illinois, is one of the local tourney organizers. With no snow and warmer-than-normal temperatures, he says some disc golfers are still at it.

Roberts says, “We obviously have a slowdown season when it gets too cold, but one of the great things about it is that anybody can play it, and it’s relatively cheap to get involved with the game.” Roberts says the association chose the Quad Cities for the championship because it successfully hosted two previous national competitions in 2007 and 2017.

Roberts says disc golf is similar to traditional golf, but with something resembling a frisbee. “They’re actually more like a discus that you would use in track and field than they are a traditional frisbee,” Roberts says. “We still have some discs that resemble the frisbee form — those are putters. They’re slower speed discs. There’s mid-range discs that are a little bit better for control, and then there’s drivers and distance drivers for high-speed and long-distance shots.” It’s scored the same as golf, but instead of holes competitors “putt” into baskets.

The 2021 Masters Championships will be for those age 40 and above. It will be held in September of 2021. Roberts says the Quad Cities is a “hotbed” for disc golf, with 11 courses in the area and a total of about 40 within a short driving distance.