You are here: Home / News / Iowa facing two storms with snow through the weekend 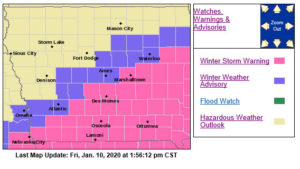 Snow ordinances have been activated, schools are letting out early and some presidential candidates have canceled appearances here as a snowstorm is moving in.

National Weather Service Meteorologist, Kory Martin, says the snow totals today are different than what was projected Thursday. “In the last 12 to 24 hours we’ve seen a general slight northerly trend with this storm. Especially with this first of two systems that is going to be coming in — we’ve seen a northerly shift,” Martin explains.

He says that shift has the heaviest snows starting at an axis in central Iowa. “From Des Moines up through Cedar Rapids over toward Dubuque — with some kind of lesser amounts on either side of that axis,” according to Martin. “We’d be looking at out of this first round in general heaviest amounts probably in the four to six range With the heaviest amounts probably falling in the afternoon and early evening hours.”

He says more snow is in the forecast Saturday — but the distribution will be different. “We’re looking at another round tomorrow which will probably impact mainly southeast into east-central Iowa with a few more inches of snowfall. We’re probably going to have a tight gradient on the western side of that,” Martin says.

Can we expect a heavy lift with the shovel — or is this going to be lighter snow that will blow around more. “Today will probably be a wetter snow, heavier snow — and then tomorrow transition toward the fluffier side of things,” Martin says. “Either way, it’s still snow and a lot of these places that are going to be picking up the most snowfall haven’t seen a lot of it this year.”

Martin says snowfall amounts can vary greatly across the state — as can conditions — so you should be aware throughout the weekend. “Be sure you are checking road conditions with the Iowa DOT ahead of time if you must travel. And be prepared to take extra time and slow down,” Martin says. Most places in the state have seen more brown than white-covered ground so far this winter.

The state climatologist says we got a statewide average of 2.4 inches of snowfall in December. The normal December average is 8.3 inches.