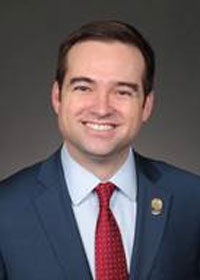 Three traffic-related bills have already emerged in the 2020 Iowa legislature.

A bill to make seat belt use mandatory for back-seat passengers has cleared a subcommittee in the Iowa Senate. Senator Zach Whiting of Spirit Lake says federal statistics show nearly half of the people killed in motor vehicle crashes last year were not wearing a seat belt.

Representative Megan Jones of Sioux Rapids has introduced similar legislation in the House that would require back-seat passengers to buckle up.

“I think this is a helpful reminder because sometimes you’re just kind of squished in the back, you can’t quite reach it or something and you say: ‘Oh, well it’s not law so I don’t need to wear it,'” Jones says. “Well, let’s find that seat belt. Let’s dig it out. Let’s click it and move on.”

A constituent who works on medical flights told Jones he is concerned about the injuries he’s seeing in traffic accidents.

“If we have those people secured and tucked into their belts, then we have a less likelihood they’re going to fly into someone else who may be properly belted in, but still faces injuries because of that flying person in the back seat,” Jones says.

Another transportation-related bill would let authorities ticket drivers who drive too slowly in the left-hand passing lane.

A third bill would direct the DOT to put “rumble strips” on all paved county roads that intersect with state and federal highways. The requirement would apply to county blacktops where the speed limit is 55. Representative Dean Fisher of Montour, the bill’s lead sponsor, says the bill was inspired, in part, by a December 1, 2019 accident in Benton County that killed a 26-year-old Des Moines woman.

“Missed a stop sign on Highway 30. She hit a semi. A very tragic loss. There weren’t any rumble strips at the intersection,” Fisher says. “Perhaps rumble strips would have saved her and so many others.”

Two other lawmakers are co-sponsoring the bill after fatal wrecks in their districts involving vehicles on a county blacktop that did not stop and were hit while crossing onto a highway.

“Having that rumble strip, which is a completely different sensory perception than the visual of a stop sign I think would help tremendously,” Fisher says.

Rumble strips are indentations carved into a roadway and vehicles rumble when passed over the area. Fisher says he doesn’t like mandates, but rumble strips on paved county roads alert distracted or drowsy drivers a stop sign is ahead.