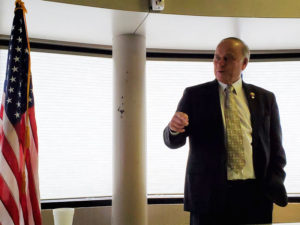 Iowa Congressman Steve King says he won’t speak publicly about the case of a young girl who was raped by a family member and became pregnant, but he is open to talking privately with those directly involved.

King held a town hall in Clear Lake yesterday and was asked if he would support an abortion in a case like this — the same question King was asked in August at a town hall meeting in Rockwell.

“This is a specific case that people in the neighborhood know,” King said yesterday. “…I don’t want to say anything here or in front of the press that’s going to put any more stress on anyone.”

King is a long-time advocate of banning all abortions. His remarks in August on the subject sparked controversy.

King was non-committal yesterday, though, as to whether abortions should be allowed when a girl who is not yet a teenager becomes pregnant due to incest.

“That’s way too tough a decision for a legislator or a legislature to make,” King said. “I don’t want to touch that one right now because there are very, very few cases.”

King, who is seeking a 10th term in the U.S. House, faces Republican challengers in the June Primary. About 30 people attended his town hall meeting in Clear Lake.