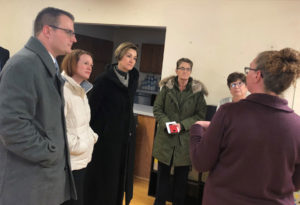 A consultant with experience at facilities that care for patients with severe intellectual disabilities is now working at the Glenwood Resource Center — and Governor Kim Reynolds says new hiring procedures already have been put in place for future staff.

The Department of Justice is investigating allegations of poor patient care. Reynolds visited the center this week and met with current staff as well as some of the residents.

“It was nice to be on site,” Reynolds says. “It was really an opportunity for me to thank the workers there and let them know that…we are making changes. We are going to get it right.”

Reynolds says some of the state’s most vulnerable Iowans are patients at the center.

Federal investigators plan to be at the Glenwood Resource Center in February and they’ve asked to see the medical charts for all patients who’ve died in the past year. Reynolds says conditions at the facility were “not acceptable” and changes are being made — like bringing in University of Iowa doctors to evaluate the patients.

“The DOJ is collecting their information. They’ll report back, but in the interim they’ve been very, I think, impressed with what we’ve already done to start to address the concerns that were raised, so we’re going to keep doing that and we’re going to keep changing policies and procedures and get things turned around and back on track.”

The Department of Justice is also investigating allegations the superintendent at Glenwood Resource Center had been doing human experiments on patients. Reynolds placed the superintendent on paid leave in November, then fired him on December 30.