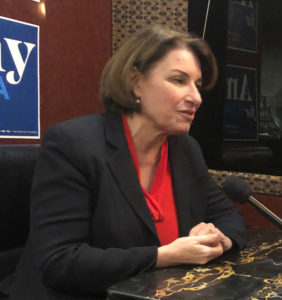 Minnesota Senator Amy Klobuchar says she had secretly planned to do another 99-county tour of Iowa this week after completing the circuit for the first time in late December, but she’s in the senate this week for the impeachment trial.

“I just have to hope, as I’ve always said, the obstacles on the path are not obstacles. They are the path,” Klobuchar said Sunday, “and that somehow the people of Iowa are going to have my back and make sure that somehow, some way I get a ticket out of Iowa to keep going with this campaign.”

Klobuchar gets into specifics with audiences, sharing items from her a list of 137 things she’d do as president with executive authority. “We have to have someone that has ideas — yes, bold ideas — but also a way to get things done,” Klobuchar said, “and I’m the one that’s passed over 100 bills since I got to the U.S. Senate.”

Klobuchar often uses humor in her speeches. She told Radio Iowa in a Sunday evening interview conducted on her campaign bus that humor can unite people.

“I am as serious as the next person about the job in front of us, but I think it’s important to take all your work seriously, but not always yourself seriously,” Klobuchar said.

Klobuchar also shares stories about her parent’s divorce, surviving a childhood with an alcoholic father and winning every race she’s ever run in Minnesota. She sums it up by asking Iowans to consider her grit.

“You’ve got a lot of people who give beautiful speeches and have all these talking points,” Klobuchar told Radio Iowa. “I think in the end, they have to think in their hearts of who’s the person that really, when you look at their lives, has been able to lead and get things done, but also shows resiliency.”