You are here: Home / News / Sanders to seek recanvas of some Iowa Caucus precincts 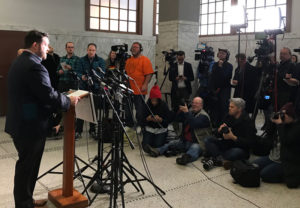 “As I’ve stated before, the challenges in reporting data and delays in publicizing results were categorically unacceptable,” Price said. “Iowa Democrats demand better of us and, quite frankly, we demand better of ourselves.”

By midday Saturday, precinct chairs and presidential campaigns asked Iowa Democratic Party officials to review the results of 95 precincts. By Sunday evening, the party announced revised results in 55 precincts. Results from another 36 precincts could not be altered, according to Price, even though there were errors in delegate calculations.

“The math worksheet is actually a legal document. It’s signed by the precinct chair and the precinct captains — the campaign representatives in those precincts — and so we are not allowed to change that,” Price said. “We have to report out what is reported to us.”

The chairman of the Democratic National Committee said on CNN this weekend he is “mad as hell” and there will be a conversation about the November election about whether Iowa’s Caucuses retain their first-in-the-nation status.

With Sanders’ request for a recanvas, it’s likely the results of Tuesday’s New Hampshire Primary will be final before last Monday’s Caucus results are final. Sanders, during an interview on CNN Sunday, said the Iowa Democratic Party exhibited extraordinary incompetence. Sanders said the situation is a disgrace to Iowans who take the caucuses seriously.