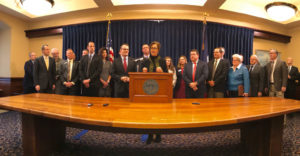 Governor Kim Reynolds is holding town hall meetings around the state to build support for her “Invest in Iowa Act.”

The plan would raise the state sales tax, lower other taxes and dedicate more money for water quality initiatives and the state’s mental health system.

“I’m going to go out there and drive this!” Reynolds said today. “…That’s not unusual. We’ve done that before. That’s actually how we put this together. We’re out in the state. We’re visiting 99 counties.”

Details were released in bill form last week. Reynolds held a news conference today with representatives of groups that were involved in the negotiations that developed the plan.

“We sat down and looked at a lot of different opportunities to not only fund priorities that are important to us but to have it be an overall tax cut,” Reynolds said. “It builds on the income tax cuts from 2018. It doubles the amount, I think, in the full first year that it’s implemented.”

Representative John Wills of Spirit Lake, the third-ranking Republican in the Iowa House, called the plan “bold” — but he told reporters it may not stay intact as it works its way through the legislature.

“We’re really trying to digest the bill itself, understanding what’s all in it and that sort of thing,” Wills said, “and so we really haven’t had a chance to discuss it in depth.”

Reynolds is in Oskaloosa at 2:30 and Ottumwa at five o’clock this afternoon to meet with Iowans about the plan.