You are here: Home / News / Back and forth weather continues with potential for return of snow 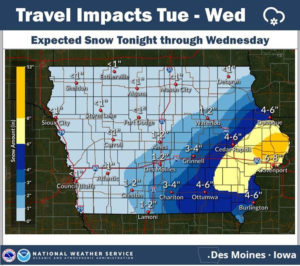 While parts of Iowa saw near-record high temperatures Sunday in the mid-60s, the cold weather is returning quickly along with the potential for heavy snow.

Meteorologist Roger Vachalek, at the National Weather Service in Johnston, says 22 counties in southeast Iowa are under a Winter Storm Watch beginning late tonight.  “The most impactful weather is going to occur from the southeastern portion of the state near Ottumwa up through the Quad Cities and just south of Dubuque,” Vachalek says. “They may see anywhere from about five up to about eight inches of snowfall.”

Strong winds will likely accompany the snow which could create white-out conditions. “For any folks traveling down to Interstate 80 or even as far south as Highway 30 tomorrow in the southeastern portion of the state,” Vachalek says, “you could run into some problems there.”

Once the snow moves through, Vachalek says things should stay relatively quiet.  “By tomorrow night, we’ll see lows generally in the mid- to upper-teens and highs on Wednesday only in the mid-20s,” Vachalek says. “It stays chilly for Thursday and even into Friday with highs in the 20s to around 30.”

The forecast calls for a slight warm-up by the weekend.