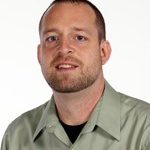 Two down and one to go for William Penn’s men’s basketball team. After winning the Heart of America Athletic Conference regular season championship last month, the fifth-ranked Statesmen won the Conference tournament Tuesday night, defeating number 22 Clarke 96-90 in Oskaloosa. Nathan Gehring had a big night for the Statesmen with 26 points and 17 rebounds. The 6-10 junior from Waukee knew he was going to have a busy night.

“My other big man, Eddie Daley, went down (injured) in the first half. So I knew at that moment that I was going to have to step up and have a big night. And I told him right when we went in at halftime, I was like ‘We’re gonna do this for you.’ because you hate to see somebody get injured. I’m a second half player, I knew I was going to turn it on.”

Gehring had 22 of his 26 points in the second half. Statesmen Coach John Henry said his team’s depth simply wore down the opposition.

“You can play with us at our pace for a while, but eventually your guys are going to get tired.”
Dexter Hood added 25 points for William Penn, as the Statesmen go on to the NAIA national tournament with a 12 game winning streak and a 30-3 record. They’ll find out tonight where they’ll be seeded in the nationals. Clarke is now 24-9 on the year and will wait to see if they are part of the NAIA tournament.