You are here: Home / News / Advocates seek boost in state money for trails 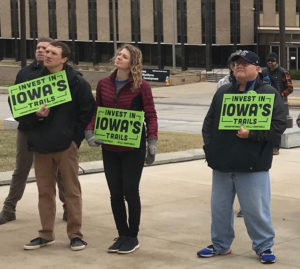 A coalition of organizations is lobbying legislators to expand the state’s trail system.

“Greater investment in trails through the ‘Invest in Iowa Act’ will only accelerate the community and workforce development that we do need in this state,” Wyatt says. “But most of all, Iowa trails make Iowa a great place to live.”

Groups pushing to convert abandoned railroad lines to trails are joining with members of the Iowa Natural Heritage Foundation and economic development officials to stress the need for improved access to spots for hiking, biking and swimming. Wyatt says many towns that have developed trail systems have seen the economic impact and health benefits.

“Because people that get physical activity often are healthier,” Wyatt says. 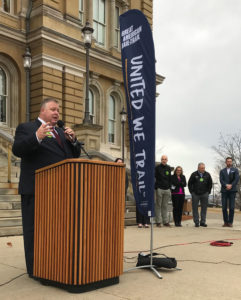 Wyatt’s group did a study nine years ago found bicycle trails created an annual impact of 365 million dollars. Representative Andy McKean of Anamosa joined the groups at a news conference on the statehouse steps. He says investing in trails reaps tremendous dividends.

“We’ve been chasing smokestacks and in many cases giving away useless tax credits instead of taking a good, hard look at the quality of life issues that attract and keep young people in our state,” McKean says. “And trails rank way up there in that equation.”

Governor Kim Reynolds is holding a town hall meeting in Ankeny tonight to discuss her “Invest in Iowa Act” which includes more money for trails. It also would lower some taxes, but raise the state sales tax and it’s unclear if the legislature will pass the plan.