You are here: Home / News / LGBTQ students escorted out of Iowa Capitol 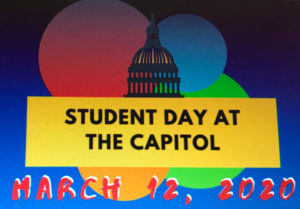 A group of students was escorted out of the Iowa capitol by state troopers after some transgender students refused to leave a men’s restroom and use gender-neutral restrooms instead.

Iowa Safe Schools executive director Nate Monson says the LGBTQ students were at the capitol to lobby legislators. “Students were using the restrooms that they identify with and under the Iowa Civil Rights Act for the past 13 years, that’s been a protected class,” Monson says. “The state troopers at the capitol told our students that was not the case and they physically escorted about 150 students LGBTQ youth out the door.”

Someone had called capitol police to report an adult and minor females were in a men’s restroom. A video posted online shows a trooper telling the group his concern was about “some type of possible sexual activity” in the restroom. No one was arrested, but a couple of dozen students wound up waiting on the capitol steps for nearly three hours for a school bus to pick them up.

Fifteen-year-old Morgan Gooden of Mitchellville says students in the group aren’t mad, but they are annoyed.

“We all just want this to stop,” Gooden says. “This was supposed to be our day to talk to legislators…and they had to ruin it for us over a bathroom.”

Monson, who organized the lobby day, is seeking a meeting with the governor and the state public safety commissioner to discuss the incident.