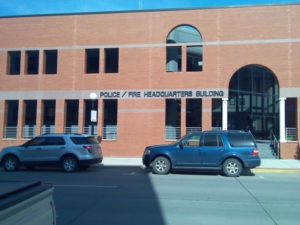 Sioux City Police have announced several staff members have tested positive for COVID-19, but officials are not releasing the exact number of employees affected or what their positions or roles may be within the department.

“We wanted to make sure that we’re being transparent and then also review the procedures we have in place to ensure that we are following the best practices to protect the public and our officers,” McClure says. “The important thing is right now our capabilities to provide essential services have not been impacted and we continue to monitor our employees’ health.”

McClure says the department has enough staff to respond to 911 calls and other calls for service in Sioux City.

“Officers have been sanitizing equipment and cars regularly and then as of today, officers will be wearing masks when interacting with the public and co-workers,” McClure says, “just to ensure that we’re being as safe as possible and minimizing the risk.”

The Sioux City Police Department employees who tested positive for COVID-19 are recovering in isolation, according to McClure. Their ages and conditions are not being released. Sioux City is in Woodbury County and the latest report from state officials indicates 12 positive cases of COVID-19 have been confirmed in the county since testing began last month.

McClure says the entire staff has not been tested.

“Any employees that we think may possibly may be getting sick, we’ve been working with an over abundance of caution and providing them the resources they need to take care of themselves whether that’s self-isolating or any other resources we can provide to them,” McClure says, “just to protect them and the other staff members.”

It appears Sioux City’s police department may be the first law enforcement agency in the state to have staff test positive for COVID-19. The president of the Iowa State Sheriffs and Deputies Association told The Des Moines Register on Wednesday he was unaware of any Iowa deputy or officer testing positive for the virus.