You are here: Home / News / Governor and aides to frame timeline for reopening Iowa 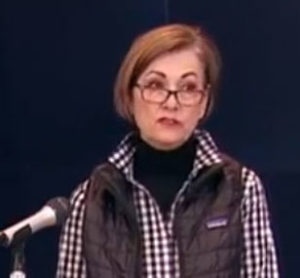 Governor Kim Reynolds is meeting privately with a group of state agency directors today to chart when COVID-19 closures may be lifted.

“We’ll start to kind of frame up the timeline,” Reynolds said yesterday, “what we’re looking at.”

The governor has ordered Iowa’s K-through-12 schools to be closed through April 30 and she has promised to announce by this Friday if those closures will extend into May. Iowa bars and restaurants have been closed since St. Patrick’s Day and Reynolds ordered other types of businesses to close in late March as well.

“We want to get things up and going. We have to do it responsibly. We have to be cautious in how we do that, because we don’t want to just flip the light switch and then you know, have another spike happen in a week,” Reynolds said. “That’s not going to be beneficial for anybody. We don’t want to open things up, only to say in a week: ‘We’ve got it shut it back down.'”

Reynolds has suggested businesses in areas of the state where few, if any, COVID-19 cases have been confirmed may be the first to reopen.

“Everybody should be making plans because at some point, you know, as we base the decisions based on data, we want to open up this economy,” Reynolds said.

A top public health official says the state’s current estimate that COVID-19 cases in Iowa will peak by the end of the month is based on what’s happened in other states where cases of the virus were first reported.