You are here: Home / News / Secretary of State Pompeo to headline Iowa event in July 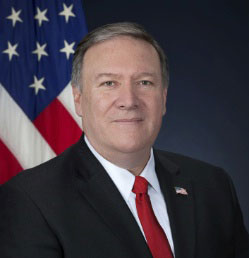 U.S. Secretary of State Mike Pompeo will be the headliner at an annual event that in the past has featured Donald Trump and Ted Cruz well before they officially launched their presidential campaigns.

Pompeo is scheduled to speak at The Family Leader’s annual mid-year “Leadership Summit” on July 17th in West Des Moines. Pompeo, an Army veteran, has been President Trump’s secretary of state for the past two years. He was the president’s CIA director before that.

Last year, Pompeo said he is open to running for president after Trump leaves office. Pompeo’s speech in July will be his second major address in Iowa. He spoke in March of 2019 at the World Food Prize Headquarters in Des Moines, telling farmers at that time he was seeing “real progress” in trade talks with China.

Pompeo is a former Kansas congressman. Earlier this year, Pompeo announced he would not run to replace a retiring U.S. senator from Kansas. Pompeo has said he plans to remain as President Trump’s secretary of state as long as Trump wants him to do so.