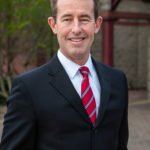 Northwestern College has announced the hiring of Dr. Micah Parker, an intercollegiate athletics leader with more than 27 years of experience, as vice president for athletics. Parker, the director of athletics at NCAA Division I California Baptist University since 2009, will start his new position later this summer.

As athletic director at California Baptist, Parker leads a department with a $25 million budget, 90 full-time staff, 21 sports and 450 student-athletes. He oversaw the institution’s transitions from the NAIA to NCAA Division II and now NCAA Division I-and an invitation to the Western Athletic Conference.

“Northwestern has a great tradition of achieving athletic excellence while maintaining its Christian mission,” says Parker. “I’m excited to help build upon that. I competed in the GPAC as a cross country and track athlete in the late 1980s, and I coached against Northwestern in men’s and women’s basketball. I’ve always had a great respect for the Christian mission of the college and the accomplishments they’ve enjoyed both in the GPAC and nationally. This is an opportunity to use the experience I’ve been blessed with to help our teams win in life beyond the successes in athletics.”

Parker replaces Dr. Earl Woudstra, who retired in November after 36 years of service to Northwestern, the last five of which were as athletic director. He is now the city administrator for Orange City.