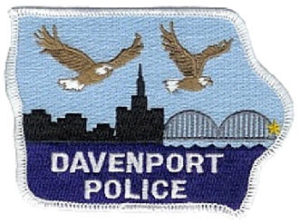 Davenport’s mayor is calling for a countywide curfew and plans to ask the governor to send in the Iowa National Guard after protests turned violent overnight, leaving several people shot.

Davenport Police Chief Paul Sikorski says rioters were inside more than a hundred vehicles that were racing around town, creating mayhem and causing destruction. “We had four shooting victims this evening, two fatalities from those shots fired incidents,” Chief Sikorski says, “and we had one officer that was shot this evening.”

The chief says three police officers were “ambushed” while on patrol about 3 o’clock this morning. There was an exchange of gunfire and the officer was shot. A vehicle thought to be connected to the ambush crashed and several people were arrested. The unidentified officer is said to be in good condition.

Chief Sikorski says the unrest began in the vicinity of NorthPark Mall, where windows were shattered and stores were looted. From the mall, the chief says the agitators fled in dozens of cars, trucks and SUVs. Sikorski says, “We responded to dozens of confirmed shots fired incidents in the city involving those vehicles and the occupants of those vehicles.”

Des Moines and surrounding Polk County were placed under an eight-hour curfew last (Sunday) night through early this morning — and Davenport Mayor Mike Matson says he’s planning to follow suit. Mayor Matson says, “As a result of last night’s violence, as a precautionary measure, I’m working with my counterparts in Scott County to issue a countywide curfew.”

The mayor says he joined with more than 700 other people at Saturday’s demonstration in Davenport to protest the death of George Floyd in police custody in Minneapolis. Last night’s chaos was not about justice or remembering Floyd, he says, and the criminal acts won’t be tolerated. He intends to bring in reinforcements.

Mayor Matson says, “I will be speaking with the governor this morning and will be requesting assistance from the Iowa National Guard in coordinating a response for the next few nights.” Residents are urged by Matson to stay home and stay inside. One of the fatal shootings happened at a west Davenport Walmart, but no victims’ names or further details are being released.