You are here: Home / Fires/Accidents/Disasters / Teenager drowns in private pond near Le Mars 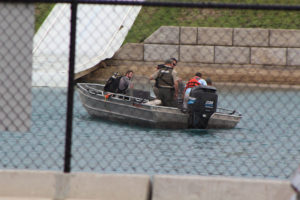 Rescuers search for a missing teen near Le Mars.

A 13-year-old boy drowned Saturday afternoon near Le Mars at a private pond while attending a birthday party.

The boy was reported as missing, and rescuers used a boat from the Iowa DNR equipped with a sonar system to help locate the boy at the Kellen Ponderosa. He was found about two hours after he was first reported missing in about 15 feet deep of water.

The child was transported to the Floyd Valley Healthcare in Le Mars where medical staff pronounced him died.