You are here: Home / Agriculture / Some wet areas reported, but early growth looks good for crops 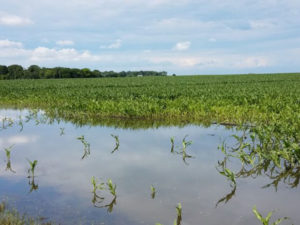 With virtually all of the state’s corn and soybean crops planted, most of them well ahead of schedule, farmers across the state are reporting the plants look to be emerging in very good shape.

Kelvin Leibold is a farm management specialist with the Iowa State University Extension and Outreach in north-central Iowa.
“We started off this spring with a very favorable planting season, for the most part, and that helped us out,” Leibold says. “We ended up with a bit more rain than we wanted and we saw the corn plants struggle a bit to go from the primary root system to the main root system, but now we’ve got enough heat and we seemed to pop through that.”

Some areas of the state have water standing in the fields, though Leibold says he’s crossing his fingers that the weather will cooperate. “We do have some areas around that have standing water in the potholes because we’ve had some pretty significant rainfall events,” Leibold says. “But we’re going to go into the hotter, warmer, drier part of the year with a good soil profile and that should help us sustain yields as we move forward.”

Leibold says many growers are looking forward to the opportunity for record yields this fall. “Hopefully, we can avoid serious events like hail storms, although we’ve had a couple of issues with that already this year,” Leibold says. “That’s always a concern as we get through the season, but none the less, there is optimism for some outstanding yields as we go forward here the rest of the summer.”

While some fields are wet, it’s a far cry from 2019 when prolonged flooding forced a number of Iowa producers to abandon their acres for the entire growing season.