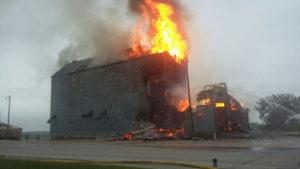 The Highview elevator was set fire in a training exercise.

Smoke could be seen for miles from a spectacular weekend fire that destroyed an old grain elevator in the Hamilton County community of Highview, west of Webster City.

Scott Thompson, from Fire Training Consultants of Humboldt, says the fire was put out repeatedly and intentionally started again as a training exercise for area firefighters.

“We’ll probably haul 250,000 gallons of water today,” Thompson says. “We’re showing them how to handle a large structure fire with water hauled in. It’s a good training exercise for everybody. We have probably 15 to 20 fire departments here and lots of equipment, lots of manpower.” 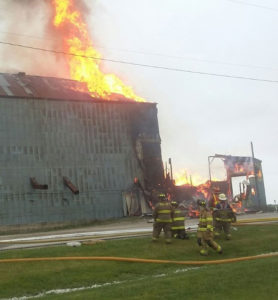 The fire departments came from across four counties in north-central Iowa counties — Hamilton, Hardin, Webster and Wright. Thompson says he’s been overseeing these types of training fires for a long time.

“I’ve been doing it for 25 years and I quit counting at 200 of these structures that I’ve burned,” he says. As of early this morning, the remnants of the old elevator were still smoldering.