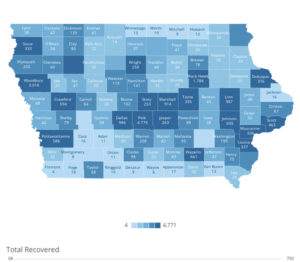 State officials have changed the way recovery from COVID-19 is reported on the state website with coronavirus information and Governor Kim Reynolds says it means more hours will be spent finding people who may have been near someone who has the virus.

Case inspection first teams try to speak with every Iowan who tests positive and then talk with people the patient may have had contact with. Ten days later there’s a follow-up call to see if the Iowan has recovered from the virus.

“What’s happening is a lot of the calls go unanswered or unreturned on the follow-up calls,” Reynolds says. “and then they’re not counted on the Iowans recovered.”

Unless the state gets information that the person with COVID has been hospitalized, has not recovered or has died, Reynolds says the new policy is to count someone contract tracers have not been able to reach as recovered 28 days following a positive test.

“This time frame equates to two incubation periods,” Reynolds says, “and processes…similar to what other states are doing.”

This new policy went in effect Monday and the percentage of Iowans shown on the state website as “recovered” went from around 60 percent to almost 80 percent.

“We believe that this change more accurately reflects the number of Iowans recovered,” Reynolds says, “and will allow our case investigation team to have more time to assist Iowans who are newly diagnosed.”

Iowans who travel to New York, New Jersey and Connecticut are now being asked to quarantine there for 14 days. Officials in those states say it’s because Iowa — and 13 other states — now have weekly averages showing at least 10 percent of people being tested have the virus. Reynolds suggests that’s old data and Iowa’s positivity rate on Tuesday was 9.5% of those who’ve been tested.