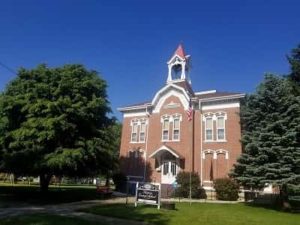 The Lake City Council has expressed support for a new dog park in the community, next to a building that’s on the National Register of Historic Places, but it’s not clear whether the project will move forward.

A private group operates the historic Central School Building, which opened in 1884 and is now operated as a history and cultural center. City Administrator Eric Wood says the question of how liability issues would be handled has been answered.

Central School Preservation originally planned to begin designing and fundraising for the dog park project once they had the answer on liability coverage. However, Wood says there has been some pushback from residents who live near the proposed site.

“We’ve been getting several letters here at city hall voicing some good and some voicing their opposition to it: ‘It’s gonna be noisy.’ ‘Too much traffic.’ That type of thing,” Wood says, “but then we’ve heard from people that are interested in having it because once again it is something for homeowners with small yards or no yards. They can take their dog somewhere and get some exercise.”

The Central School Preservation Board of Directors has decided to postpone the project to explore the residents’ concerns, then make a formal decision by the end of the summer on whether they will continue with plans for the dog park.