You are here: Home / News / Ernst says Trump should fill any Supreme Court vacancy in 2020 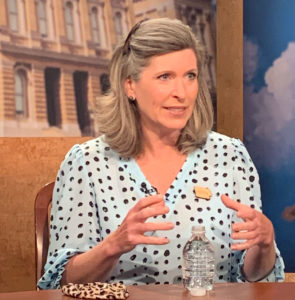 Iowa Senator Joni Ernst, a Republican, says if there’s a vacancy on the U.S. Supreme Court, the U.S Senate should start the process of filling it as soon as possible.

“We have a Republican-held Senate and a Republican president,” Ernst said this afternoon, “and so I don’t see there would be any difference between the president and the senate on a selection of a supreme court justice.”

Republican Senators refused to act on President Obama’s nominee after Justice Scalia died in early 2016, arguing voters that November should decide which president should get to fill the vacancy.

Justice Ruth Bader Ginsburg announced today (Friday) she is undergoing chemotherapy for a reoccurence of pancreatic cancer. Ginsburg, who is 87, intends to remain on the court.

Senator Chuck Grassley, Iowa’s other Republican senator, was chairman of the senate committee that refused to hold a hearing on Obama nominee Merrick Garland in 2016 and Grassley has said a hearing should wait until after the election, if there is an opening on the court in 2020.

Ernst said Republican senators should hold a hearing on a Trump nominee even in a so-called “lame duck” session in November and December — after the election. She discussed the issue with “Iowa Press” host David Yepsen this afternoon.

“If President Trump is defeated, if Republicans lose control of the Senate, would you still support doing this prior to January?” Yepsen asked.

Ernst replied: “Well, one, I wish nothing but the best of health for Ruth Bader Ginsburg. I think we all do and I will be praying for her and it is a lame duck session. I would support going ahead with any hearings that we might have and, if it comes to an appointment prior to the end of the year, I would be supportive of that.”

A spokesman for the Iowa Democratic Party blasted Ernst’s comments.

“Senator Ernst promised to be an independent voice for Iowans, but instead she’s spent her six years in Washington shamelessly putting Mitch McConnell’s harmful agenda above the interests of Iowans,” IDP spokesman Jeremy Busch said in a written statement.

In 2016, when Republicans refused to act on President Obama’s Supreme Court nominee, Ernst argued that “in the midst of an important election, the American people deserve to have a say in this important decision that will impact the course of our country for years to come.”

Ernst became a member of the U.S. Senate Judiciary Committee after the panel’s hearings for Brett Kavanaugh, the second justice President Trump has appointed to the nation’s highest court.