You are here: Home / News / The oldest state park in Iowa marks 100 years in operation 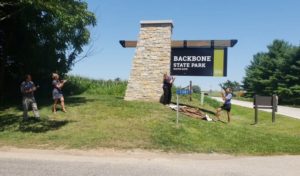 The celebration included the unveiling of a new sign.

Backbone State Park is located in the valley of the Maquoketa River near Strawberry Point in northeast Iowa’s Delaware County.

Longtime Manchester resident Mike Carr was among the dignitaries at the event, as he’s the grandson of E.M. Carr.

“They are blood ties, believe me, because it was my grandfather who actually donated the backbone of Backbone State Park to the state of Iowa for its first state park,” Carr says. “So, it’s the oldest, obviously, if it’s first, and we have celebrated that today, 100 years.”

The original dedication was held on May 20th, 1920, as Carr’s grandfather welcomed a crowd of about 6,000 people to the park.

“People have re-found nature with the COVID scare, which is great,” Sunne says. “They’re using our parks and our trails and the campgrounds and the cabins. I’ve been here for 23 years and this is the busiest I’ve ever seen it, but it’s a big park so people can spread out and you can isolate yourself as much as you want to.”

Roger Helmrichs is a member of the Friends of Backbone group which supports the park. To celebrate the centennial, Helmrichs says they’re putting together a time capsule for Backbone to open in the year 2120.

“We purchased a somewhat secure box that will last for what we hope is 100 years,” Helmrichs says. “We’re putting a number of items in that. Some of them are in regard to the history of the park. We’ve got some newspapers that were published today and we’ve got some seeds from trees and plants that are available in 2020.”

The weekend event was originally scheduled for late May, with a big three-day community celebration, but COVID-19 guidelines led organizers to postpone the event, with just a small private dedication held instead. Governor Kim Reynolds spoke at the brief ceremony.