You are here: Home / News / Wind turbines on private property a flash point for Iowa lawmakers 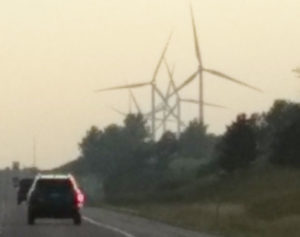 Three GOP members of a key committee say they plan to block state regulators from expanding their authority to turn over private property for wind energy developments.

Some Iowa counties have passed local zoning ordinances restricting where wind turbines may be placed. Critics say those restrictions would be overruled by the proposed Iowa Utilities Board regulations — because if the board approves a wind farm project, eminent domain authority could be used to convert private property for the public use of renewable energy generation.

Senator Zach Whiting of Spirit Lake, a member of the Iowa Legislature’s Administrative Rules Review Committee, said he has a number of concerns about “the dramatic expansion of eminent domain authority the Utilities Board appears to give itself.”

Private property rights and utility development have been a flash point for lawmakers from both parties for years. In 2006, then-Governor Tom Vilsack vetoed legislation that limited the power of local governments to seize private property for commercial development through the eminent domain process — and 87 percent of the Iowa legislature’s members voted to override that veto.

A year ago, Governor Kim Reynolds said she favored local control and opposed statewide regulation of where wind turbines may be located.