You are here: Home / News / Major storm rolls through Iowa, estimated 250,000 without power 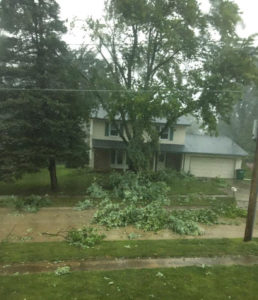 A powerful storm system with recorded wind gusts of up to 99 miles an hour is striking the state, causing significant tree and property damage. Tens of thousands of Iowans have lost power.

The City of Ames announced at noon that power was out city-wide.  Boone also was hard hit. The Association of Rural Electric Cooperatives reports outages reported 34,000 of its customers were without power.

The roof of the Des Moines Bucaneers Ice Hockey Area was damaged. Hockey lessons were underway inside the building at the time, but no kids were hurt.

The Iowa Department of Transportation is reporting several Iowa roads are impassible this afternoon, including Interstate 35 in both directions between Ames and Alleman and I-680 between Cedar Rapids and Iowa City due to the severe weather.

Storm damage has impacted communications to digital message boards, so incoming traffic may not be alerted to the closures as they normally would be. There is currently no detour identified for the interstate closures as several of the usual detour routes are also impacted by the storm with debris and power lines over the roadway.

The Iowa DOT recommends limiting travel in impacted areas as much as possible until crews can get out to remove power lines and clear debris.