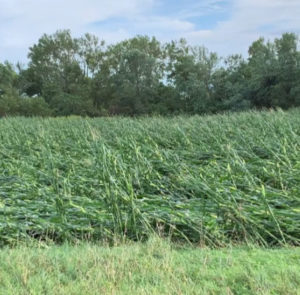 “This morning I had a farmer reach out to me to say that this was the worst wind damage to crops and farm buildings that he has ever seen across the state in such a wide area,” Reynolds said during a news conference late this morning.

According to the U.S.D.A., 23.4 million acres was seeded with corn and soybeans this spring, so this early estimate indicates 43 percent of Iowa’s 2020 corn and soybean crop has been damaged or destroyed.

“When I say 10 million acres, that is really an early estimate,” Reynolds said. “Some of the photos have just been devastating.”

Reynolds is planning an aerial review of the damage.

“I’m hoping tomorrow with the Department of Public Safety I am able to do a fly around so I can get some sense of what that agricultural damage looks like,” Reynolds said, “but multiple bins, hoop buildings, sheds are gone.”

State officials advise farmers to take photos of the damage to crops and farm buildings and consult with their insurance carriers. Reynolds told reporters the state has experience seeking federal help to cover grain losses in destroyed bins after the flooding in southwest Iowa last year.