You are here: Home / Agriculture / Millions of bushels of stored grain damaged in Iowa storm 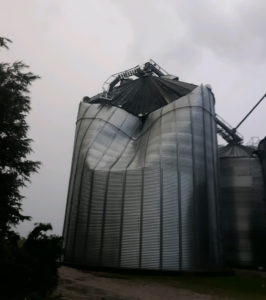 State Ag Secretary Mike Naig says some of the corn that was flattened by Monday’s storm will bounce back, but it’s anybody’s guess as to what percentage of damaged Iowa crops may be harvested.

Grain bins, silos and elevators were damaged as well, so losses extend to the 2019 crop. “Tens of millions of bushels of commercial grain storage and millions of on-farm grain storage was impacted, destroyed or severely damaged,” he said during an online briefing with reporters Tuesday afternoon.

Naig warned there will be storage issues for the 2020 crop, so farmers may have to truck their corn and soybeans further or resort to on-the-ground outdoor storage.

“Certainly there’ll be a lot of effort to repair whatever storage can be repaired and brought back online before fall,” Naig said, “but it’s hard to imagine that any significant amount of the storage that’s been damaged will be able to be rebuilt before harvest this year.”

The state climatologist says Monday’s derecho passed through about a third of the state. Naig said localized crop losses in central and east central Iowa fields that were flattened by Monday’s storm will be “severe,” but it’s too soon to estimate the value of crop losses in the “high damage” areas. Naig said some livestock barns were damaged, too, but there have not yet been reports that hogs, cattle or poultry were killed in the storm.