You are here: Home / Fires/Accidents/Disasters / Work on restoring power continues in Marshalltown, Clinton 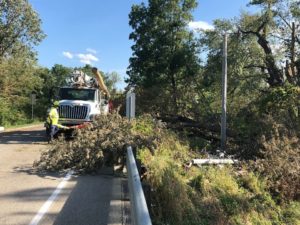 Eight days after the derecho now and more than 47,000 Iowa homes are still without power, as residents continue cleaning up fallen trees and limbs.

In Marshalltown, an estimated 5,600 Alliant Energy customers remain without electricity. Brigitte Narreau is running a generator outside her home to power her husband’s oxygen machine and to keep the house cool.

“You can live without TV but if it’s hot, you have problems,” Narreau says. “See, I had a heart attack when I was 47 so when you sit around with no power, that’s bad.” Marshalltown officials says more homes and businesses were damaged by the derecho than the tornado that struck two years ago.

In Clinton, a mobile community resource center was set up in a city park to provide ice for people to preserve food, but now, storm survivors can get pizza, produce, milk and meat. Clinton Mayor Scott Maddasion says one of the most important services being offered to people without power is charging stations.

“There are so many things that are run off technology now, dialysis machines and different medical devices,” Maddasion says. “We had some folks down there charging those types of devices so that they could take them home and use them when needed.”

He hopes the response to last week’s storm will help them respond to severe weather in the future. “Sometimes in Iowa, we feel like we’re not as prone to some of these hurricane-type winds because we’re in the Midwest, but they came through,” Maddasion says. “I definitely want to put this on our radar so that we continue to have a plan in place.”

The resource center in Clinton is a collaboration of the city and county, plus Mercy One hospital, and Information Referral Assistance Services.