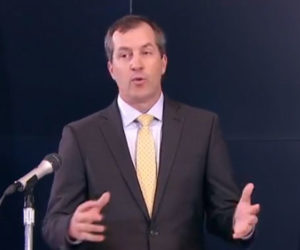 The weekly Iowa crop and weather report shows only half of the state’s corn crop and just 56 percent of the state’s soybeans are rated in the good to excellent categories.

Iowa Ag Secretary Mike Naig said that’s the lowest rating for corn this season. “It’s down nine points this week and it’s down 20 points over the last two weeks, Naig said, “so conditions are definitely getting tough out there.”

It’s caused by a combination of drought conditions, particularly in western Iowa, plus the August 10 derecho hit fields where strongly yields had been projected.

“You think about what this crop could have been,” Naig said during an interview with Radio Iowa, “and it’s always disappointing to go out there and harvest yields that you’d rather not have, so there’s a lot of frustration and just so much uncertainty for folks as they head into the next few weeks.”

Drought conditions are now reported in nearly 88 percent of the state right at the time the kernels on an ear of corn and the beans inside soybean pods are filling out.

“A little historical perspective here: that’s the widest drought coverage of the state since 2013,” Naig said.

It comes at a critical time as corn and soybeans finish developing.

Naig said high temperatures over the next several days will create more stress on the 2020 crop. Pasture conditions for livestock have deteriorated over the past week. Federal officials are giving some farmers in the driest parts of the state permission to use conservation reserve acres for hay or as grazing land for cattle and other livestock.