You are here: Home / Agriculture / Grain loading terminal for barges under construction near Blencoe 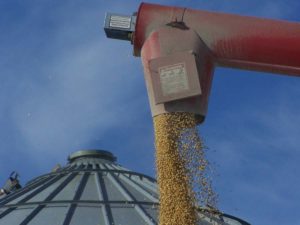 Construction is underway on a new barge loading and unloading terminal on the Missouri River near Blencoe in western Iowa.

When complete, the facility will accommodate 240,000 tons of soybeans, corn, dried distillers’ grain and dry fertilizer per year. Soy Transportation Coalition executive director Mike Steenhoek says the terminal will provide a new route for Northern Plains commodities to the Gulf of Mexico.

“They have a design and intention to load a modest number of barges for the export market of soybeans yet this fall in November to December,” Steenhoek says. “For farmers in the western part of the state of Iowa, it really is exciting. It provides a new marketing option.”

The farmer-owned NEW Cooperative in Fort Dodge owns the terminal. Steenhoek says the Missouri River is underused for shipping ag commodities and the NEW Co-op facility will help producers ship their product in a more cost-effective way rather than by rail.

“The Missouri River could be more actively utilized from a navigation perspective, particularly for agriculture,” Steenhoek says. “Whether it’s exports for soybeans, DDGs, corn, inbound shipments for fertilizer, the inland waterway system makes a lot of sense.”

Steenhoek says having the NEW Cooperatives facility on the Missouri River could encourage the building of other terminals downriver in order to take advantage of using barge traffic to ship ag commodities. “The Missouri River will never rival the Ohio, the Mississippi, or the Illinois River in terms of volume of freight moved, but we do think it is a maritime highway that should be used more than it is,” he says. “It could be an additional marketing opportunity for farmers in that region.”

That includes not only Iowa and Nebraska, but Missouri, Kansas and South Dakota. He says initial phases of construction should be complete within two months.
(By Jerry Oster, WNAX, Yankton)