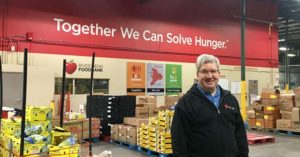 Under growing demand, a Davenport-based food bank is providing record numbers of meals to people in eastern Iowa and western Illinois.

River Bend Foodbank president and CEO Mike Miller says the pandemic arrived more than ten years after the Great Recession, and it hit just as he was about to announce “food insecurity” had fallen below the pre-recession levels of 2008. Miller says 2020 has been a year like no other.

“The food bank set new monthly distribution records in April, May, June and July, averaging over two-million meals per month and a new record of 2.3 million meals in July,” Miller says. “We are almost keeping up with the increased need in spite of significant obstacles.” Demand has increased from around 100,000 people not having enough food to 160,000.

Miller says operations are more difficult with COVID-19 measures in place, such as social distancing and no-contact food delivery. Plus, the River Bend Foodbank is just now starting to invite volunteers back to help. “The concern early on was, ‘Oh, no, with this increased need, might we run out of food?’ and I’m happy to report that no, we’re maintaining inventory levels even above what we did a year ago because we got ahead of the game and purchased food orders early on to make sure that didn’t happen,” he says.

Supply chains have also been seriously interrupted by COVID-19 outbreaks. Still, Miller argues that hunger is a “completely solvable problem.” “This country throws away fully one-third of the food we produce and that is enough food to feed everyone, we’re just throwing it away,” Miller says. “The only thing it would take to end hunger in our community is for us all to commit to never throwing away food that could still be eaten by someone in need.”

Miller says this is a marathon, not a sprint, and people can help by donating and learning more online at RiverBendFoodBank.org.