You are here: Home / News / Seating available on the ‘Field of Dreams’ outfield for ‘Dinner on the Diamond’ 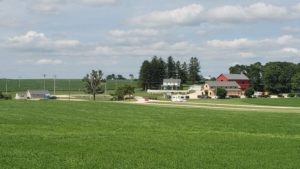 There’s limited outdoor seating available for dining in the outfield featured in the iconic 1989 movie about baseball that was filmed near Dyersville.

“What better place to have a nice, sit-down meal and a relaxing meal other than the Field of Dreams movie site?” asked site manager Roman Weinberg.

“Dinner on the Diamond” is being offered this Friday through Sunday as well as the last weekend in September and two weekends in October. There will be three separate seatings for diners each evening, at 5 p.m., 6:30 and 8 p.m.

“This is just another way we’re trying to draw people out and have a unique experience that has never been offered here before,” Weinberg said. “It’s even like this that keep us on the map.”

The menu is “Iowa inspired” according to Weinberg and it features one reimagined ballpark staple.

“We have the Grand Slam Hot Dog,” he said, “which is a bacon-wrapped hot dog with macaroni and cheese and barbecue sauce.”

Reservations are required.  An area near the Field of Dreams site had been tapped as the location of a Major League Baseball game this summer, but those plans were pushed back until 2021 due to the pandemic.