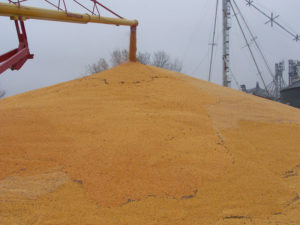 China is working to rebuild its grain stockpiles after the pandemic and Iowa farmers will be helping to fill the order.

“They had been running at a deficit for several years by consuming way more corn than they produced and they did that by getting into their stocks,” Hayes says. “Then COVID has convinced them to rebuild those stocks rather than to deplete them and so that has created a scarcity there and an opportunity for us.”

China is willing to buy huge quantities of American commodities, Hayes says, because Iowa corn is cheap compared to grain produced in China. “It’s good news for corn and soybean producers,” Hayes says. “Their domestic prices are about $8.50 and ours are probably closer to $3 in central Iowa, so there’s a big incentive for them to buy our corn rather than their own.”

China has a storage quota of 7.2 million tons of corn, but Hayes predicts they’ll go far beyond that figure. While the August 10th derecho heavily damaged millions of acres of Iowa fields, it won’t prevent Iowa producers from making a big sale in China, since other nations are cutting back their purchases.

“We were going to have big carry-out stocks with or without the derecho, so where China’s going to get that corn is from product that we would’ve otherwise stored into next year,” Hayes says. “Hogs, corn and beans have been on a tear and it’s all China-related. So many other markets we’re having difficulty with because the world economy is slowing down. Countries are going to have to go into austerity because of the money they’re spending right now.”

The most recent data says China will now import $21 billion in agricultural products from the U.S. in the first year of the Phase One deal, an increase of almost three-billion from the first prediction in May.