You are here: Home / News / Dry weather remains on western side of the state 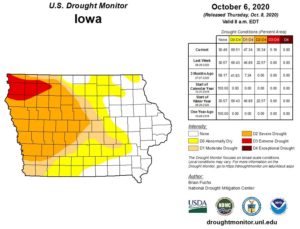 The U.S. Drought Monitor out today shows around 47% of the state in moderate drought,  and more than two-thirds of the state is still abnormally dry.

Iowa DNR hydrologist, Tim Hall, says there’s also a surplus of moisture in parts of the state. “It’s kind of a mixed bag in the state. Northeast Iowa has a surplus of water and west-central and southwest Iowa has a deficit of water. On average it’s not too bad. But you really can’t look at averages this year,” Hall says.

He says central Iowa is doing okay for water — but things change as you move west. “In Audubon, Gutherie, Carroll, Greene, and Shelby counties — driest April to September on record for that part of the state. So those folks in some of those places they are more than 15 inches behind where they should be on rainfall for that time period,” according to Hall.

The end of September brought the end of the growing season and concern about the crops having enough water. Hall says the focus now shifts to other water needs. “We’re looking ahead towards the next growing season certainly, and we are also looking ahead to the point where the ground freezes up and we have less ability to move water into the soil,” Hall says. “And any water that gets into the soil and eventually into the groundwater typically will end up not just being a source of water for plants, but a lot of communities pump groundwater out and use that for their drinking water supplies.”

Hall says rainfall usually slows down this time of year — but any rainfall in the dry areas can help. “We come out of a dry summer, if we go into a dry fall and the ground freezes up and sort of cuts off the ability of moisture to get down into the soil — folks is those parts of the state who have been really suffering this summer from dryness are going to find themselves in the same dryness hole next spring and it’s going to be hard to get out of,” Halls says.