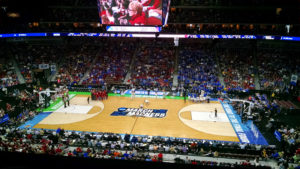 March Madness is coming back to Des Moines. Wells Fargo Arena will host the first and second rounds of the men’s NCAA Basketball Championships in 2023.

Greg Edwards is with the Des Moines Convention and Visitors Bureau. “Kind of an emotional time for all of us. COVID has hit, the travel industry, the event industry, the sports industry has been devastated over these past eight months,”Edwards says. “Finally, we have something to cheer about. Finally, we have hope of something to look forward to.”

It is the third time the city has landed the men’s tournament. Wells Fargo Arena hosted the first and second rounds in 2016 and 2019. Chris Connolly is the general manager of the Iowa Events Center. “The real positive thing for us is we are actually getting in year one of the bid cycles for the second time in a row. So we feel pretty confident that we are in the rotation with the NCAA Men’s’ Basketball Committee and we’ve done a great job between selling tickets and rolling out the red carpet for the student-athletes and fans that are coming into town,” Connolly says.

Connolly says the city has set a standard. “I think the NCAA knows when they come into town into Des Moines they are the main show in town,” Connolly says. “And we really do roll out the red carpet and the hospitality is phenomenal. I think the game operations inside are great. And then as each bid comes through we just try to do better and better and better as we experienced the tournament.”

It’s estimated the tournaments brought $4.6 million in direct spending to Des Moines in 2016 and 2019.