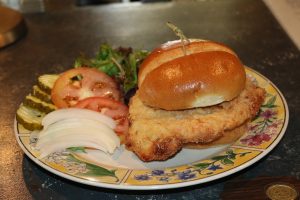 A Linn County restaurant is the home of Iowa’s “Best Breaded Pork Tenderloin” for 2020.

Iowa Pork Producers Association spokesperson, Dal Grooms, says the winning sandwich is sold at the PrairieMoon On Main in the small town of Prairieburg.

“It’s about 30 miles northeast of Cedar Rapids and they’ve been in business a few years and had been thinking about what really is a good tenderloin,”Grooms says. “And they decided that they were going to focus on the flavor and the juiciness of the pork rather than the breading — although it is a breaded tenderloin.”

Grooms says there were plenty of entries from Iowans in this year’s contest. She says they had more than 390 different restaurants entered by some 4,500 people. “that’s really pretty spectacular when you think about the year we’ve been living through,” according to Grooms. “Some establishments had either closed or reduced the number of service hours they had because of all the pandemic related closures.”

Loren and Amy Lacy have owned the restaurant for about a year-and-a-half. PrairieMoon will receive $500, a plaque, and a large banner to display.

This is the 18th annual best tenderloin contest that is held each October during Iowa Pork Month.