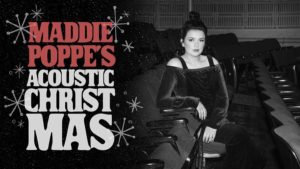 Maddie Poppe, the Iowa native who rocketed to fame after winning American Idol two years ago, will be performing a live concert in Cedar Rapids in December.

Katie Ripke, spokeswoman for the Paramount Theatre, says tickets are going on sale this week for what’s believed to be Poppe’s first live show anywhere since the pandemic began.

“I’ve been checking out her social media feeds and her websites and I haven’t seen anything else, but I can’t say for sure,” Ripke says. “It’s definitely her first performance in Cedar Rapids and we’re super-excited to have her.”

The historic Paramount can seat almost 1,700, but due to coronavirus, only about 600 tickets will be sold for this show. Ripke says those tickets will be sold in “pods.” “We’re spacing the pods out six feet apart and the pods vary in size from two seats, three seats, four seats and up to five seats,” Ripke says. “You have to buy all of the tickets within a single pod but that guarantees you six feet of clear space around you.”

The Paramount’s parent company has been holding concerts and other events at several Cedar Rapids venues since September with strict health policies in place. “Face coverings are required,” Ripke says. “You can take them off when you get to your pod but if you’re up moving about the venue, going to the concession stand or the restroom, entering or exiting, you have to have your face mask on.”

Fans of live music are very willing to make the effort, she says, as people are hungry to see in-person performances return. “Our fans have been phenomenal, keeping their face masks on, following the rules, staying socially distanced and the feedback has been overwhelmingly positive,” Ripke says. “People are just so happy to be out and doing something somewhat normal.”

Poppe won American Idol’s 16th season in 2018, winning over fans and judges with her unique singing style as well as playing the piano, guitar and ukulele. She originally auditioned in New York with the song “Rainbow Connection,” made famous by the Muppet, Kermit the Frog.

This show is called “Maddie Poppe’s Acoustic Christmas” so Ripke expects a series of holiday tunes, likely interspersed with some of the singer’s hits. Her second album, “Whirlwind,” reached #2 on the iTunes Pop charts.

Poppe is a Clarksville native who will turn 23 on December 5th. The concert is scheduled for December 12th. Tickets go on sale this Friday at CREventsLive.com.