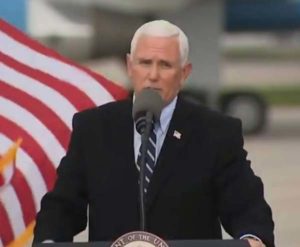 Vice President Mike Pence says today’s report on economic growth in the third quarter shows the country is roaring back after the pandemic’s hit.

Pence spoke at a rally at the Des Moines Airport this afternoon, highlighting the report showing the Gross Domestic Product grew 33% in July, August, and September.

“And with four more years of Donald Trump in the White House we’re going to bring the American economy back bigger than ever before,” Pence said.

Pence spent the midsection of his speech on economic issues. He blasted the 2009 bailouts for the financial and auto industries during the Obama-Biden Administration and Biden’s approach to the pandemic.

“The headlines today tell us actually that several European countries are actually starting to shut down, so you can bet that Joe Biden will lock down the American economy if he ever makes it to the White House, but we’re not going to let it happen,” Pence said. “We’re going to meet this moment with American compassion and ingenuity.”

Pence, who heads the White House Coronavirus Task Force, promised a vaccine will be “defeat the virus” and ensure America’s economic recovery. Pence, a frequent visitor to Iowa over the past four years, acknowledged the state’s outsized role in deciding the 2020 election.

“I need you to show one more time that Iowa is Trump country,” Pence said.

Pence mentioned he and his wife, as well as the president and first lady, have already voted and took time during his remarks to refer to Iowa’s early voting rules and reciting the address for the Polk County Election Office where ballots can be cast Friday, Saturday and Monday.

“I need you to vote, Iowa!” Pence yelled into the microphone. “…And remember: friends don’t let friends vote alone. Bring a family member. Bring a neighbor. Bring a coworker.”

Democrats criticized Pence for holding a large public gathering in the midst of a pandemic. Biden’s communications director said Iowans have been “pushed to the brink” because the Trump-Pence Administration “has completely given up on trying to control the virus.” Biden will campaign in Iowa tomorrow, speaking at a drive-in rally where the crowd will sit in their vehicles and honk their car horns to applaud Biden’s remarks.